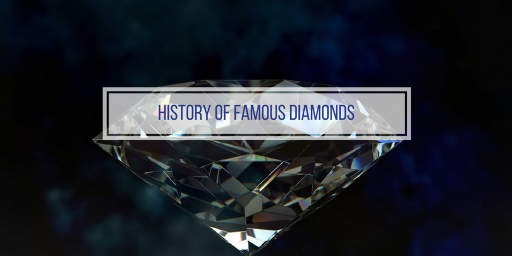 The 9 Most Famous Diamonds and the Stories Behind Them

The Archduke Joseph Diamond is a 74.65 carat, flawless D diamond that was discovered in the famed Golconda Mine in India. Originally it belonged to Hungary's Hapsburg family and was named after Archduke Joseph of Austria. The cushion-cut diamond disappeared until 1961 after being hidden in France during WWII. It last sold in 2012 for 21.5 million dollars. This sum was the most ever paid to date for a colorless diamond. It has sometimes been worn in a necklace by celebrities such as Celine Dion, who wore it on television in 2002.

At 101.29 carats and a vivid yellow color, the Allnatt Diamond is a natural showstopper. It is thought to have come from the De Beers Premier Mine in South Africa, but its origins are not certain. In 1950, the diamond was placed in a ring created specifically for it. The setting was commissioned by the diamond's owner, Alfred Ernest Allnatt. In 1996, the diamond ring was sold to SIBA in Hong Kong for $3 million and today resides with an anonymous diamond collector in the United States. 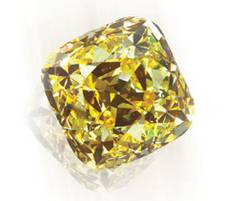 As far as large diamonds go, the Hope Diamond is one of the biggest. At 45.52 carats, it is the largest deep blue diamond in the world. It is also a very old diamond. First purchased by Louis XIV of France, it was lost in 1792 after the new French government gained possession of it during the French Revolution. It reappeared in 1812 and received its name from owner, Henry Thomas Hope, who obtained it in 1839. Eventually it passed to jeweler Harry Winston, who donated it to the Smithsonian where it resides today. The Hope Diamond is particularly famous because of a supposed "curse" that is credited with causing the beheading of Louis XIV and his wife, as well as the rumored financial and personal misfortunes of many of its owners. 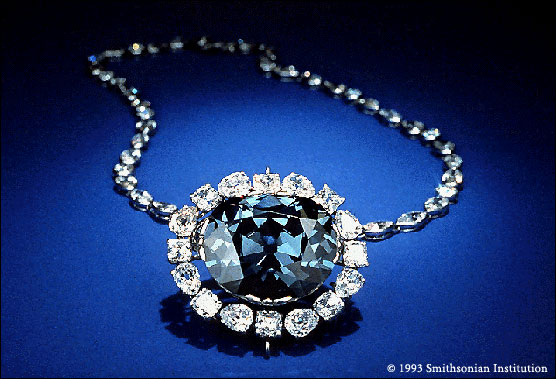 The Great Star of Africa

Among the famous diamonds throughout history, the Great Star of Africa stands out because of its enormous size. Also known as the Cullinan Diamond, it was a massive 3,106.75 carats when it was discovered in South Africa in 1905. The diamond was later cut into 105 gems, with 9.5 carats worth of unpolished pieces left over. The largest gem obtained from the original uncut piece is 530.4 carats large and now holds the title of the Great Star of Africa. It resides in the Royal Scepter of England, among that country's Crown Jewels in the Tower of London.

The Koh-i-Noor Diamond is one of the oldest of famous diamonds, as well as one of the most conflict-laden. Originally from India, it is believed to be the Syamantaka diamond mentioned in a 5,000-year-old Sanskrit text in India. Over the years this diamond has changed hands many times, often as the result of conflict in which the winning ruler would confiscate the diamond for themselves. It was given the name Koh-i-Noor ("Mountain of Light") by the Persian general Nadir Shah, who possessed the diamond from 1739 to 1747. In 1849, the Koh-i-Noor became British property, where it was cut into a 108.93 carat gem for Queen Victoria. It is now one of the Royal Jewels and resides with them in the Tower of London. 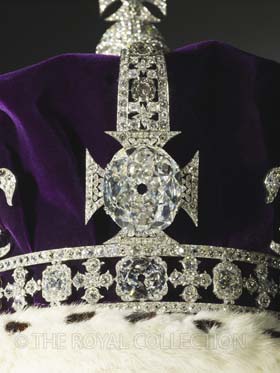 How are cremation diamonds made?

One of the largest and most flawless colored diamonds in the world is the Centenary Diamond. This stunning gem was discovered in the same mine as the Great Star of Africa: the Premier Mine. Its beauty and complexity required the use of the most careful, hand-cutting technique called kerfing. The entire process of cutting the diamond down took about three years in the hands of renowned diamond cutter, Gaby Tolkowsky. When it was finished, the polished gem contained 247 facets and was 273.85 carats large. The stone was first displayed at the Tower of London, though its exact whereabouts since then are uncertain.

Quite possibly one of the most beautiful diamonds in the world, the Regent was discovered in India in 1698, where it was obtained by Thomas Pitt, the English governor of Madra. After it was cut in England, however, it was purchased by French royalty, where it enjoyed a long history of use as a crown jewel. It appeared on Louis XV's coronation crown, Louis XVI's crown, on two swords, Charles X's coronation crown, the crown of Napoleon III and the crown of Empress Eugenie. Ultimately, it was put on display in the Louvre in Paris, where it remains today.

The Orlov is a fascinating diamond with a long history. About 190 carats, with a pear shape and a distinct blemish on one side, it resides in the Diamond Treasury in Moscow on the Imperial Scepter. It got there through a long and complex route that many think began in the 17th century with the discovery of the Great Mogul, an enormous diamond of more than 787 carats. The Great Mogul was cut down to a much smaller size and disappeared from history. Many people think that the Great Mogul was cut down even further and reappeared as the Orlov. What is known is that the Orlov was set as the eye of an Indian god, was stolen by a Frenchman and eventually made its way to Count Orlov of Russia. He gave the diamond to his love, Catherine the Great of Russia, and it has resided in Russia ever since.

The Taylor-Burton Diamond was another large and flawless gem found in the Premier Mine (where the Great Star of Africa and the Centenary Diamond were also found). This diamond is now 68.09 carats in a beautiful pear shape. While it has had a couple of owners, it is most famous for being purchased by Richard Burton for his then wife, Elizabeth Taylor. When Taylor and Burton divorced, Taylor sold the diamond and put part the $5,000,000 of proceeds toward building a hospital in Botswana. 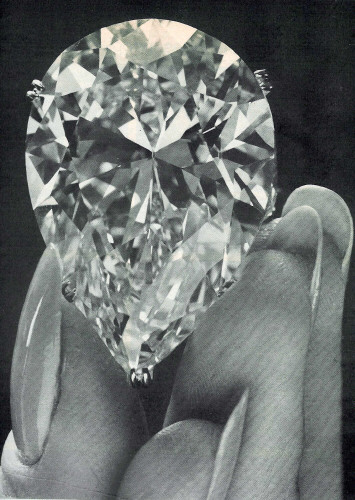 The Blue Moon Diamond is a flawless 12.03 carat fancy vivid blue diamond. When it sold for 48.4 million dollars, it earned the title as the most expensive diamond in the world. This stunning diamond was purchased by Joseph Lau, a billionaire from Hong Kong for his daughter, Josephine. He renamed the diamond the Blue Moon of Josephine, and the diamond joins another beautiful blue diamond he purchased for his other daughter, Zoe: The Zoe Diamond. 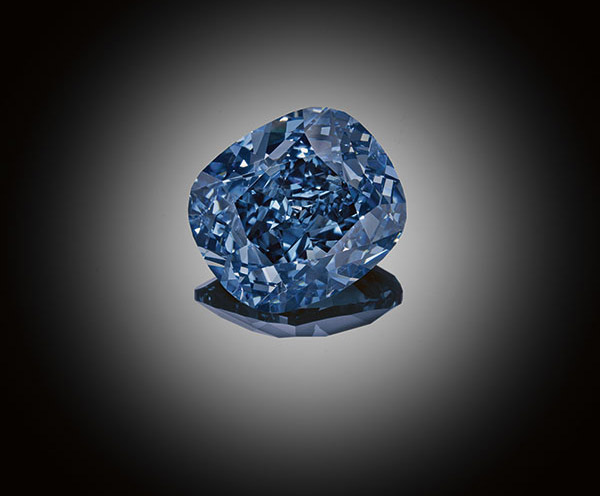 3 world-famous diamonds and why they are here to stay

Mystery, intrigue and daring Indiana Jones-style raids have given many diamonds a story to tell. The fact that they are everlasting allows their story to endure throughout generations.

As such, these precious stones have come into the possession of royalty or important figures throughout history. Here are three of the most memorable diamonds the world has ever seen:

This monstrous diamond is perhaps considered the greatest of them all at an impressive 105 carat (21.6 g) weight. Kōh-i Nūr means “Mountain of Light”, which was accorded to it due to its stunning beauty. Once the largest in the world, it is said to be over 5,000 years old. Legend describes it as a gift from the Sun God to his avatar for providing him with 1,000 kg of gold per day.

However, its recorded history dates back to 1304 AD. It was owned by the leader of the great Mughal Kingdom of Indo-Pakistan subcontinent and it may have been part of the famous peacock throne built for Shah Jahan. It was bitterly fought over and journeyed through many ruling classes of Persian, Afghan, and Indian societies.

Finally, in a battle between the Sikhs and the British, it was taken by the East India Company and presented to Queen Victoria in 1877 as she was given the title Empress of India. It has been worn at the coronation of three subsequent British queens and remains part of the crown jewels on display in the Tower of London.

Is the Hope diamond a famous cursed gem?

Found in the Natural History Museum in Washington, D.C. this diamond weighs 45.52 carats or 9.1 g. Within the crystal structure, there are traces of boron which gives it its blue appearance. Hence why when it was sold to Louis XIV it was named the Blue Diamond of the Crown of France.

Whilst not the largest diamond, its history is no less surrounded by mystery. Its fame arises as it is believed to be cursed. According to the Smithsonian Institution, mythology holds that it was stolen from the eye of a sculpture of the Hindu goddess Sita. Once in France, it was again stolen during the French Revolution only to reappear 20 years later. It passed through various hands making its way to the UK and US.

It was sold to an English banker, Henry Thomas Hope, and named after him. This began a sequence of unfortunate events which continued to the subsequent owner, an American widow, Mrs. Edward McLean. In her lifetime she lost her money, watched her only child die, and attempted suicide.

However, stating that the diamond is cursed to many is simply an invention to add mystique to the stone and increase its value. Having said that the subsequent owner, after Mrs. McLean, was a diamond merchant in New York. He noted that many of his customers refused to even touch it which resulted in him giving it to the Smithsonian Institute in Washington.

The Orlov (Orloff) diamond: an egg-shaped remnant of the Romanov crown jewels

The Orlov diamond holds an enticing story of power, beauty, and attraction. Mounted in the imperial scepter of Catherine the Great of Russia, it has a fine clarity and a slight bluish-green tint. It is estimated to weigh 189.62 carats or 37.9 g!

In the 17th century, the diamond was used to create the eyes in a statue of a celebrated Hindu God at one of the most sacred sites in the country. By devious route, a French soldier who had deserted his post gained access to the inner temple containing the statue. He stole one of the diamonds and fled. The diamond changed hands many times before it was bought by Prince Orlov.

His intention was to buy it to woo Queen Catherine. Although his attempts failed, she was mystified by the diamond which she had set in the imperial scepter designed by Troitnoki, immediately beneath the golden eagle.

Every diamond has a story to tell, especially cremation diamonds made from the ashes of a deceased loved one

Each of these three famous diamonds has its own history, beauty, and mystic which draws people from around the world to admire it. Their enduring nature means that these diamonds are here to stay for eternity ready to intrigue and be treasured by future generations.

Want to create your own stunning and unforgettable history that will continue forever? A memory of magnificent beauty? This is how Heart In Diamond can help. Why not talk to us today.