Home  /  Diamond questions and answers   /  How are artificial and synthetic diamonds made in 2021?

What are Synthetic Diamonds Made of? 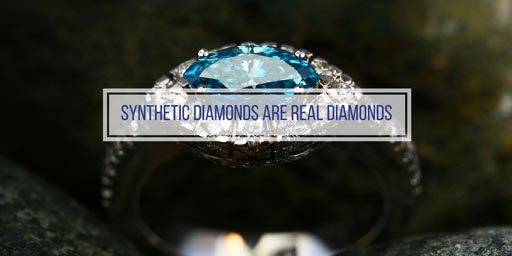 Currently, two methods exist that are widely-used to create synthetic diamonds. The first process that most closely resembles the Earth’s natural diamond-creation process, is known as high-pressure high-temperature (HPHT). The second process which does not require high pressure is called chemical vapor deposition (CVD). Therefore, synthetic diamonds are also commonly referred to as HPHT diamonds or CVD diamonds in reference to which creation process was used.

A falsehood inflicted by the word synthetic, often gives consumers the impression that these artificial diamonds are not authentic diamonds. This is not true. In fact, no matter which process, CVD or HPHT, is used - these synthetic diamonds are composed of the same exact material as natural diamonds (crystallized in isotropic 3D form - pure carbon). The Federal Trade Commission in the U.S. indicated that alternative names such as: laboratory-created, laboratory grown, or [manufacturer-name]-created - would be more effective at clearly communicating the nature of these gemstones.

When did Diamond Synthesis Begin?

Claims that diamonds were being created artificially circulated between the years of 1879 and 1928. While these claims were analyzed, none of them were confirmed. In the 1940s, the United States started heavily researching the synthesis of diamonds, while other countries, such as Sweden and the Soviet Union, started using HPHT and CVD processes to create diamonds. The very first creation of a diamond that could be successfully reproduced was reported sometime around 1953.

Currently, CVD and HPHT are the only two commonly used processes to create diamonds - but they are not the only ones. Detonation synthesis is a method to create diamonds that was introduced in the late 1990s. This process involves the detonation of explosives which contain carbon. Diamond grains no bigger that nanometer-sized are created during the blast.

The fourth known method for diamond creation involves the use of high-power ultrasound on graphite. However, this method has no application commercially.

Because CVD and HPHT diamond-creation processes are the only ones widely used and accepted, we will only be looking at the properties of synthetic diamonds created by these two methods.

Properties of the synthetic diamond will depend on the method of creation - however, the fact remains that they are still composed of pure carbon. Differences in the hardness, electron mobility, and thermal conductivity will exist. Often times, synthetic diamonds are superior to their natural counterparts in these ways.

In fact, the introduction of synthetic diamonds has opened doors for industry, because they possess a unique combination of low-thermal expansion, chemical and thermal stability, and high-optical expansion. Therefore, synthetic diamond is now preferred for many CO2 lasers and gyrotrons.

HPHT and CVD diamonds are able to be cut into gems that can be produced in various colors, such as, blue, orange, white, yellow, brown, blue, and green. On the jewelry market, synthetic diamonds sell for approximately 15 to 20 percent less than natural diamonds. However, the price will only further decline as the industry increases production of these diamonds.

More about how synthetic diamonds are made >>