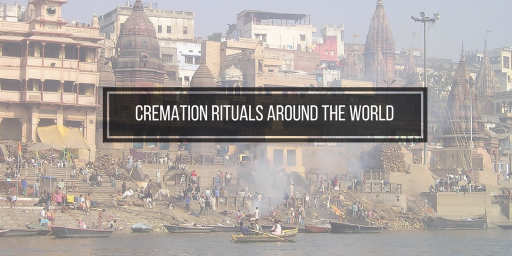 How Cremated Ashes are Used and Honored Around the World

Cremation has been an acceptable and honorable way to care for the deceased for thousands of years and across many different cultures and religions.

The traditions surrounding cremation, however, differ from culture to culture. Even in the United States, the ceremonies accompanying cremation and the use of the cremains afterwards, varies depending upon the preferences of the family. The one theme that unifies all of this diversity is the desire to create a beautiful tribute to a beloved family member and friend.

Hindu cremation rites focus on allowing the soul of the deceased to continue on its journey to reincarnation through prayer, rituals and scattering of the ashes.

Hindus believe that the soul lives on after death and can take up residence in another form (called reincarnation) or be unified to their deity, called the Brahman. The cremation ceremony typically takes place within 24 hours of death and is designed to assist the soul in this journey.

Mourners dress in white, and the body is covered with a white or a red sheet. A short wake with an open casket is allowed and then the body is carried to the funeral pyre or cremation home.

In every Hindu cremation, the presence of a karta is required. Usually a close male relative, the karta performs the cremation rites, which include walking around the body in a particular way, sprinkling water on the body and lighting the fire.

The next day, the karta collects the ashes. From there, they are traditionally scattered on the Ganges River. As Nicole N. Hanson points out on Twitter, the scattering of the ashes is an almost universal Hindu practice.

Balinese cremation ceremonies are elaborate and beautiful rituals for sending a deceased loved one off to the afterlife.

The island of Bali is unique in its cremation rites. Combining Buddhist, Hindu and animist beliefs, the islanders engage in an elaborate parade and ceremony to celebrate the deceased and their journey into the afterlife.

Called Ngaben, the main cremation ceremony has as its centerpiece a large, ornate tower called the Wadah. The Wadah, which is built by the family, carries the body to the cremation site in the midst of an elaborate parade. Mourners contribute gifts and memorials for the deceased.

To give an idea of what the procession looks like, visual artist Nick Pandev tweeted a photo he had taken of a Bali funeral procession.

The people of Bali and their traditions. Had the rare oportunity to photograph a local cremation… https://t.co/a6EZcwN98d

Once at the cremation site, the body is transferred to an ornate animal-shaped structure called a Lembu, where it is burned. The final act occurs 12 days later, when the ashes are scattered on the river as a symbol of the release of the soul to the afterlife.

Because Ngaben is elaborate and expensive, families sometimes bury the deceased until they have the money for the ceremony, in order to make sure that they can give their loved one a proper send off.

South Korean burial beads serve a practical purpose and meet families' needs to create a meaningful tribute to their deceased loved ones.

In South Korea, burial space is rapidly disappearing and a 2000 law requires families to move their loved one's graves after 60 years to make space for more burials. In light of these realities, many South Korean families are opting for cremation.

While beads have long been common in burials, (see, for instance, @Jamie_Woodward_'s comments on the presence of beads in Ice Age burials), they are becoming even more common after South Korean cremations.

In these cases, the beads are not added to the deceased, but instead are made from cremains. Called burial beads, these pink, black or blue-green beads serve as a tangible memorial to the deceased. They are often placed on display in the family's home.

Sikh cremation ceremonies are a celebration of the deceased's life and are designed to free their spirit so they can continue their journey into the afterlife.

Like Hinduism and Buddhism, Sikhism believes that the soul lives on after death. In particular, Sikhs believe the soul returns to the religion's deity upon death. The Sikh cremation ceremonies reflect this belief.

The importance of cremation in Sikhism is evident in the story of the Sikh martyr shared by @TheSikhNet on Twitter. Bibi Harsarn Kaur cremated soldiers who had been killed during a battle and as a result, was herself killed and thrown onto the same pyre.

Cremation occurs within 3 days. A ceremony beforehand almost always occurs. During this ceremony, Sikh passages are read, a sweet pudding is shared and prayers are offered. The body is often surrounded by flowers.

More prayers are recited just before the body is cremated. Most of the time, the ashes of the deceased are scattered over the water after the cremation, as a way to symbolize the release of the spirit to the afterlife.

The diversity of cremation memorials makes it easier to choose the perfect tribute, including a memorial diamond from Heart In Diamond.

These beautiful cremation ceremonies are only a taste of the kinds of memorials that surround cremation. Cremains are also often worn in jewelry, scattered at meaningful sites, tattooed onto the loved one's skin and more.

One of the most beautiful ways to memorialize a loved one's cremains is to have their ashes turned into a memorial diamond by Heart In Diamond. The carbon from the cremains is placed in a high pressure, high temperature environment for 70-120 days, where it is crafted into a gem whose size and color can be chosen by the family.

Memorial diamonds offer a way to keep the memory of a loved one always close in a form that is as beautiful as their presence was. Honoring that presence is, after all, a goal that those left behind wish to pursue, regardless of which cremation ceremonies they choose.